Armenia: Back in Yerevan and up in the mountains

Yesterday evening we arrived back in Yerevan in "our" Cascadehotel. So this morning we were once again walking on the place in front of the Cascade and the Cafesjian Center of Arts.

After breakfast we climbed in our little bus the curved and bad roads that lead up to the Mount Aragats. (4090m). At the first stop we saw the Isabelline Wheatear, the Ortolan Bunting, the whole family lark and more special a new species: the Bimaculated Lark! 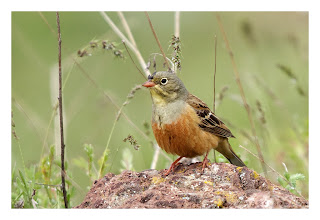 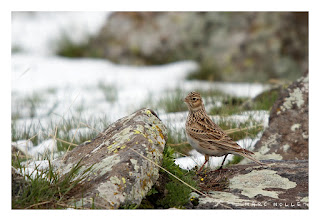 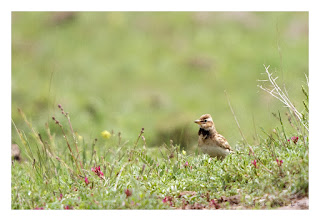 We also saw some birds of prey but these disappear rather quickly in the upcoming mist. When we reached the snow border, the mist was very heavy, we only saw the road and then suddenly there they were: some Horned Larks were sitting on the road. It was the white version: the Eremophila alpestris penicillata or Southern Horned Lark!

Suddenly the sky was once again clear and René found a eagle sitting on a pole. Our specialists discusted a long time about the determination of this bird and in consensus they all agreed: it was a second year Imperial Eagle! 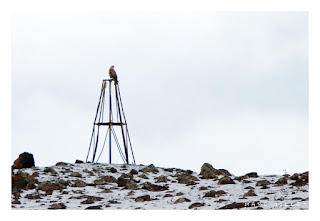 But once again the sky was covered and when it started to rain again we left the snow for a visit of an Armenian fortress located on the slopes of the Mount Aragats: Amberd. After a short visit we were invited in a small restaurant - if one can call it so - where we were served a delicious meal: a mediterranean stew of fresh trout!

In the afternoon we went to search for a Radde's Accentor, but it was only Mika who saw it. As it rained again we drove back to Yerevan. At a stop nearby a camp of Nomads we saw a group of Rock Sparrows. And a Long-legged Buzzard, one of the birds we saw every day, was photographed through the front window of the bus. 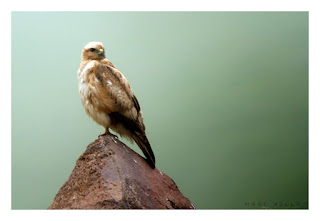 Later that evening in an exclusive restaurant we said goodbye to Mika and Sam. Tomorrow an other guide will take us on a cultural trip. We now had counted 170 species!

(Please click on the images for a larger view!)